Inspiration comes of working every day.

What is sound ?
Sound may be defined as any air pressure variation that the human ear can detect. Like dominos, a wave motion is set off when an element sets the nearest particle of air into motion. This motion spreads to adjacent air particles further away from the source. Depending on the medium, sound propagates at different speeds. In air, sound propagates at a speed of approximately 340m/s. In liquids and solids, the propagation velocity is greater – 1500 m/s in water and 5000 m/s in steel.

Sound Pressure Level
The term Sound Pressure Level (SPL) is used to define the loudness or intensity of sound. The intensity of sound is defined by how much energy it carries per unit of time through a particular medium’s unit area. A sound’s intensity is proportional to the amplitude of the vibration of the medium’s particles. A greater vibration amplitude means a greater rate of energy transported, and the more intense the sound. For a normal human ear, the displacement amplitude of sound wave ranges from approximately 10 -5 W/m 2 for the loudest tolerable sound to 10 -11 W/m 2 for the faintest detectable sound. Since a large ratio, 10 6 , is formed from these two limits of human detectable displacement amplitude of sound wave; instead of speaking of the
intensity of sound waves, it is much more convenient to speak of a sound pressure level in terms of dB. We define dB as the Sound Pressure Level in logarithmic ratio to the sound pressure, Po = 20 µPa, which is the minimum sound pressure that a normal human can detect at 1 kHz. The linear scale with its large numbers is converted into a manageable scale from 0 dB (20 μPa) to 130 dB (about 100 Pa).
The mathematical relationship between two sound pressure levels expressed in dB is shown below, where P is the unspecified sound pressure:
SPL in dB = 20 log 10 (P/Po )

To have a physical understanding of what SPL means in dB, the following table illustrates the Sound Pressure Levels in dB of different environment:

Frequency
Sound waves cause localized pressure variations in the air. The rate of these oscillations is referred to as the frequency, which is expressed in Hertz (Hz), which means cycles per second. For example, a sound with a frequency of 20 Hz causes the air pressure to rise and fall 20 times every second. Slow oscillations (low frequencies) produce bass, while high frequencies (fast oscillations) make the sounds we refer to as treble. Not all frequencies can be heard. A person with “normal” hearing can perceive sounds in the range from approximately 20 – 20,000 Hz. Frequencies too low to be heard are referred to as being infrasonic. Although you
cannot hear them, infrasonic waves can be felt. At the other end of the frequency spectrum are ultrasonic waves, which cannot be heard by humans. Most canine species can hear them however, “dog whistles” create ultrasonic waves.

Perception of Sound
An increase of 6 dB represents a doubling of the sound pressure, an increase of about 8 ~ 10 dB is required before the sound subjectively appears to be significantly louder. Similarly, the smallest perceptible change is about 1 dB. 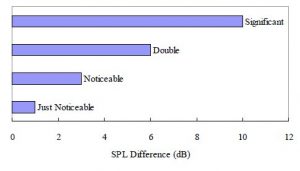 Our hearing is less sensitive at very low and very high frequencies. In order to account for this, weighting filters can be applied when measuring sound. The most common frequency weighting in current use is “A-weighting” providing results often denoted as dB(A), which conforms approximately to the response of the human ear.

A – Weighting Curve
The rate of change in Sound Pressure Level is measured in frequency. A normal human ear can perceive sound frequencies from the range of 20 Hz to 20 KHz. However, our ears respond better at mid range frequencies and also, they have higher sensitivity on certain frequencies than others. 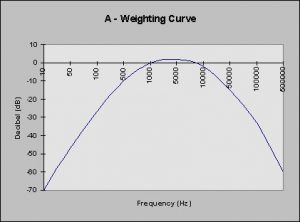 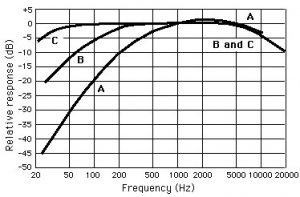 Determination of Sound Pressure Level
There are many external factors that can influence the measurement of the Sound Pressure Level. The size and shape of the room, the constructional materials of the ceiling, wall, and floor, background noise, and even testing methods and instruments can all affect the result of the measured Sound Pressure Level. Therefore, in order to minimize these influences, the testing of Sound Generators should always be carried out in relatively quiet open space or even better, in anechoic chambers.Sometimes, the distance ( 10 cm) that we use for testing the output of sound pressure level from the sound level meter may not be useful. Below is a simple guide for the determination of SPL from different distances. The mathematical relationship is as follows:

The SPL of a sound source will change according to the distance it is from a detecting device, like our ears. Below is a simple guide for the determination of SPL from different distances. The mathematical relationship is as follows:

Figure 4. points out the value change in SPL against measuring distances from sound level meter. 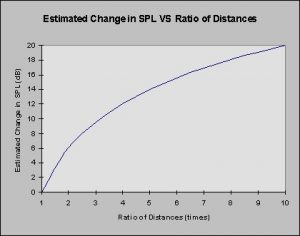 Figure 4. Estimated Change in SPL VS Ratio of Distances

For example, if users require a sound generator that can produce min. 85 dB from a distance 30 cm away from the sound level meter, then the appropriate type of JL World sound generator which satisfies this requirement should have at least 94 dB output of Sound Pressure Level at 10 cm.
Application and Selection of JL World Sound Generators
JL World Sound Generators can be applied in almost any areas that need sound including:

To select the appropriate type of JL World Sound Generators, users should consider the following factors: